I thought I wouldn’t be writing this article after news of the Carlos Gomez trade to the New York Mets but it turns out the Houston Astros doctors liked Carlos Gomez. Reports indicate that the Mets happened to have cold feet (aka pulling a DeAndre Jordan) after first agreeing to send Zack Wheeler and Wilmer Flores to Milwaukee. Whether it be due to alleged hip concerns with Gomez or more likely financial concerns that seem to never leave the Mets, there is a good chance New York missed out on the best fit to lead their team to the playoffs.

The price for Carlos Gomez was certainly not at a discount considering Gomez is having an underwhelming year by his standards. The Mets would certainly have sold low on Zack Wheeler after getting a glimpse of life without the young pitcher in 2015. Wilmer Flores also would’ve been a solid fit for the Brewers at third base with power that plays well in Miller Park. With the July 31st trade deadline just hours away, here are potential trade ideas that I have for the New York Mets.

Since the Mets aren’t your prototypical small market team in the big city, not every player is a fit in Queens. You can almost certainly rule out any half-year rentals such as Justin Upton or Yoenis Cespedes to the Mets because the team won’t give up assets for a player they know they have no shot at resigning in free agency. Mets receiving cash considerations in both the Juan Uribe and Tyler Clippard deals reinforce the idea that they don’t have the financial flexibility to add a major contract no matter how talented the player is (see Troy Tulowitzki salary dump to Toronto). So in each of the following economically feasible hypothetical trades, the Mets will be receiving a player who will be under contract for at least next season.

Even a Chicago Cubs official mentioned earlier this spring that it’s inevitable that they would have trade talks with the Mets considering how well the two teams match up in a potential trade. The Cubs seemingly have a shortstop playing every position and are looking to add pitching to complement their young talented lineup. Like Zack Wheeler who’s recovering from Tommy John surgery, Javier Baez seems to be the forgotten one in the Cubs’ resurgence in the N.L Central due in part to injuries and a demotion to AAA this season. The 22-year-old Baez still shows plus power and improved plate discipline in his limited time in the minors this season, hitting .317/.553/.946. Another positive seen is Baez’s reduced strikeout numbers compared to his season last year. Just as the Mets have gotten more comfortable trading Wheeler, the Cubs are more prepared to trade Baez. There has even been reports suggesting San Diego’s A.J Preller is targeting the young shortstop perhaps in a deal for Andrew Cashner or Tyson Ross.

While I would prefer to trade Jonathan Niese to the contending Cubs to facilitate a Baez trade, it doesn’t seem the Mets are inclined to trade Niese at this moment. Javier Baez should appeal to the Mets mostly because he is major league ready and like last year, has shown the ability to hit homeruns late in the season. He would most certainly take over the shortstop position for the Mets and be one of the few homerun threats in their lineup. In case you forgot about the young man’s power, feel free to see one of the homeruns he hit in Citi Field:

More importantly, Javier Baez still has many years of team control left and won’t be arbitration eligible for a long time. Cost control is very important to the Mets these days and Baez’s silly power is worth the price of Wheeler’s high ceiling as a top of the rotation starter. It is almost important to note that without Baez’s disappointing debut last season and injuries in 2015, it is unlikely he would be available in a trade. This is certainly something a team like the Mets can capitalize on. Let’s just say it might prove to be smarter to trade for a young potential star like Baez now rather than five years down the line after his trade value skyrockets.

I know there must’ve been some Mets fans who skipped the whole “trade for Baez before it’s too late” spiel just to get to this proposed trade. Yes, Jay Bruce has the higher chance to make the immediate impact on the 2015 Mets but I am not a fan of trading Zack Wheeler for the Reds outfielder (especially when the return could’ve been Gomez). Bruce’s presence in the lineup does provide some thump in the lineup but the fit isn’t as great as Carlos Gomez particularly because it would likely entail moving Curtis Granderson to center field in the short term. I’ve long been a fan of Jay Bruce and would actually welcome his arrival to New York since Bruce was almost destined to become a Met. The Mets actually already had agreed to a prearranged draft day deal with the agent for Jay Bruce in 2005 in the case Mike Pelfrey (how did that turn out?) didn’t fall to them.

Bruce’s contract is team friendly as he is signed through 2015-2016 with a club option for 2017. He is having a good year and is a potential 30 HR bat even in Citi Field Bruce who will supported by Granderson, Duda (Bruce’s minime?), d’Arnaud, and possibly Wright to make the Mets lineup a bit more formidable as they try to squeeze into this year’s playoffs. 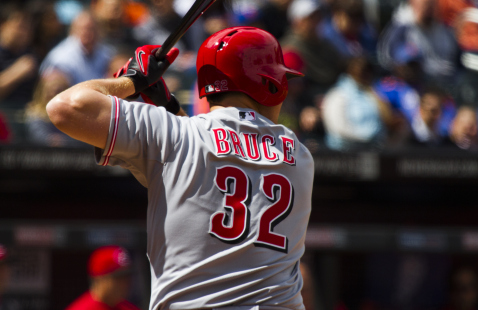 The 24-year-old Marcell Ozuna had an impressive season last year for the Miami Marlins, hitting .269 with 23 homeruns and 85 RBI in 153 games as well as an impressive 4.4 WAR. Ozuna was tied for second in homeruns by a center fielder in the National league last year. He’s no Juan Lagares but his glove isn’t too shabby either. Obviously, Ozuna isn’t having a good year since he is no longer in the majors. However, he is hitting .320/.587/.949 in his return to AAA. Ozuna’s power numbers took a big hit this year but he is still a young hitter who can improve his strikeout rate. If he can cut down the strikeouts, he will raise his walk rate and see better pitches at the plate. Reports indicate Ozuna is certainly available from the Marlins (who isn’t really?) especially since Ozuna’s agent (Scott Boras) didn’t allow him to sign a cheap contract extension for Miami.

Lagares is definitely having a down this year leading some to question whether his glove can justify his bat. The Mets have already signed the Gold Glove OFer to an inexpensive contract extension which could appeal to the Marlins. Bowman also has a chance to be a rotation starter for Miami. The Marlins have shown that they aren’t afraid to deal within the division and nabbing Ozuna when his value is at its lowest can prove beneficial for the Mets.