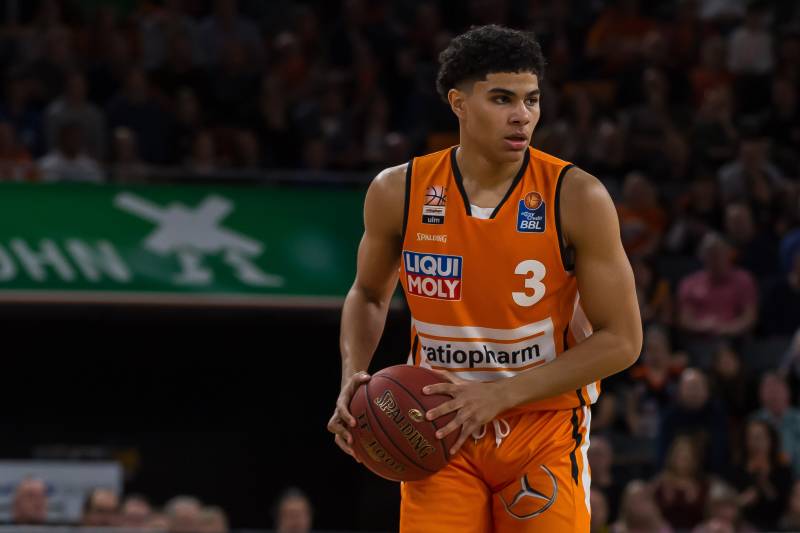 Killian is your typical American-French point guard born in Lakeland, Florida. Sounds crazy, right? Well… the son of  former ABA basketball player, DeRon Hayes, has mostly grown up in in France, where his dad ended up playing after the states. In an 2019 interview with Bleacher Report, Killian mentioned that he wanted to play high school basketball in the states but his dad had other plans: “I wanted to play in the NCAA, too, and go to a big school like Kentucky or Kansas. I wanted to be an All-American; that was my dream. But my dad said the best option was for me to stay [in France] and play pro, and I trusted him.”

Looking back now, looks like it was wise of young Killian to listen to his father’s advice. He ended up spending summers in the states playing pickup basketball and started playing in the French league at age 16. Playing against pros in the top German league this season, Hayes did more than hold his own leading the point with ratiopharm Ulm averaging: 17.2 PTS/8.3 AST/3.1 REB per 36 minutes on 45.5% shooting, 39% from three, and 91% from the free throw line. Watching Killian’s tape was a delight as you can see both American and European influences in his game as he had the American flare of scoring with fancy stepbacks while playing very fundamentally sound as you see abroad. It may be intentional as Killian mentioned in a previous interview: “I try to bring the best of America and the best of France with me when I’m on the court.”

The best way I can describe Killian’s game is smooth. He has good handles and very good court vision. He has a nice long frame for a point guard who can probably play off the ball at the two as well. Hayes has a very nice lefty shooting stroke despite some criticisms that he can’t make deep 3s. Watching his interviews, he comes out as a very levelheaded kid who just really loves the game. He has a very strong case for being the best point guard in this class.

As you can see through some of Killian’s clips, he is a smooth crafty lefty guard so he naturally draws comparisons to guys like James Harden and Manu Ginobli. I don’t think he has the size and strength of a Harden and Ginobli wasn’t as natural a point guard as Killian is. I think Hayes compares more favorably as a better decision making version of D’Angelo Russell. He might be slightly less of a scorer than D’Lo but he fits the mold of a player who thrives in the pick and roll. Killian fits in perfectly with what NBA offenses are trying to do with ball screens and fast pace.

Hayes still needs some development from his future NBA home both in terms of strength and conditioning and strong coaching but he shows a lot of promise in his wide arsenal of moves from stepback 3s to eurosteps. Killian is a fantastic finisher, shooting about 62% at the rim and should be given the chance to attack the basket more. It’s also a great sign to see him being engaged on defense as he’s not afraid to get physical and avoiding screens. Hayes can get into trouble forcing passes into tight spaces but this can be corrected. He might not be as flashy as a LaMelo Ball but Killian Hayes’s ceiling isn’t too far off and he has a substantially higher floor. I think he’s a no doubt top 5 talent in this draft and bound for success at the next level.