Earlier in the workweek, the Atlanta Braves and St. Louis Cardinals announced a four-player trade. Let’s take a closer look now that we’ve had some time to digest!

The Red Birds never expected to be in this position. They planned to hand over right field to prodigy Oscar Taveras for the next decade. Fans followed the kid’s every move through the minors since he was sixteen. He was Baseball America’s number three prospect each of the last two seasons and was supposed to be their next Albert Pujols. Nearly a month after the unthinkable calamity, John Mozeliak is looking to try and reinvigorate a franchise. Jason Heyward fills a need, is widely considered by metrics as one of the most valuable players (by definition) in the game and has the rare ability to improve in even his sixth year of service. The 25 year old hasn’t quite been able to match the hype that came with ranking ahead of the Strasburgs, Stantons and Poseys of the world pre-2010, but does have All Star games and Gold Gloves to match. The versatile Heyward has hit literally everywhere in a lineup and would presumably slide in between two professional hitters in Matt Carpenter and Matt Holliday. He gets on base at a stellar clip, once drawing 91 walks, but struggles against same side pitching (career .221) and doesn’t hit as many doubles as he should. Moving to Busch Stadium won’t aid his fly ball numbers and won’t change much in a team that finished last in the league in homeruns. Heading into a contract year, the New Jersey born is sure to be highly motivated and command a deal similar in length to Giancarlo Stanton. Will the Cardinals, without the appetite of many major markets, be able to provide such a commitment to one of the youngest free agents in recent memory? That has yet to be seen and even in the event J-Hey does walk, the Cardinals can receive compensation and cut losses that way. An extra year of Jordan Walden isn’t anything to sneeze at either, who will settle into Carlos Martinez’s eight inning role rather nicely with his decent 97 MPH fastball. Even while they might have been forced to overestimate their depth a smudge, St. Louis looks every bit of the playoff threat you’d believe them to be.

Here’s where it gets interesting. The Braves, after not registering above .500 for only the third time in twenty years, are headed for a detour before their move to SunTrust Stadium in 2017. President John Hart, a former manager and architect of a couple American League Champion Indian teams following its three decade period of irrelevancy, is definitely capable of replenishing a historically thin farm system. The process has already begun, with the club receiving a pair of Texas righties and the opportunity to do a lot more. Shelby Miller, 24, rebounded nicely in September after learning a sinker. Miller doesn’t allow many hits and struggles earlier in the season came from an inability to miss bats the way he did his rookie campaign, a cleaner end to his delivery is needed. There’s always room for a high end number two starter who isn’t arbitration eligible until next January. Tyrell Jenkins may seem like nothing more than a throw in piece but I’m sure there was a lot of bargaining to have him included. The minor leaguer finished last week in the prestigious Arizona Fall League and pitched to the tune of a 2.22 ERA for the Peoria Javelinas. The former high school quarterback and Baylor commit is an athlete on the mound, features a heavy curve and the makings of a new solid changeup. A lengthy stride caused velocity to drop and worst case scenario, Jenkins turns out to be a shut down late inning reliever. Add to this the reacquisition of Arodys Vizcaino and you have an organization that understands the importance of power pitching in the National League East. The Nationals have Strasburg and Giolito. The Marlins have Fernandez and Kolek. The Mets have Harvey and Wheeler. Atlanta has the chance to do something special in a short amount of time and really doesn’t even need a complete rebuild. Their rotation can surprise folks with Julio Teheran, Kris Medlen, Wood and Minor figuring in the mix. The Bravos have added payroll flexibility, shedding ten million already and cannot be scared to unload some more. The Seattle Mariners are desperate for another star to couple with Robinson Cano and aren’t having the best luck selling themselves. Justin Upton’s bat can play anywhere and he’d immediately transform that offense into above average. He’s removed them from his no trade list and the times never been better for a shakeup involving yet another guy who’ll command nine figures. Additionally, it’s not as if J-Up was acquired for anything of significance in the first place and Taijuan Walker plus a DJ Peterson is enough to make you think twice. This could be all the shifting you need to assemble the amount and type of talent you want as quickly as possible. Freddie Freeman and Andrelton Simmons are the cornerstones and would be 27 in their primes when you’re ready to win big again. You know who effectively takes number fifteen in next year’s draft thanks to this, right? 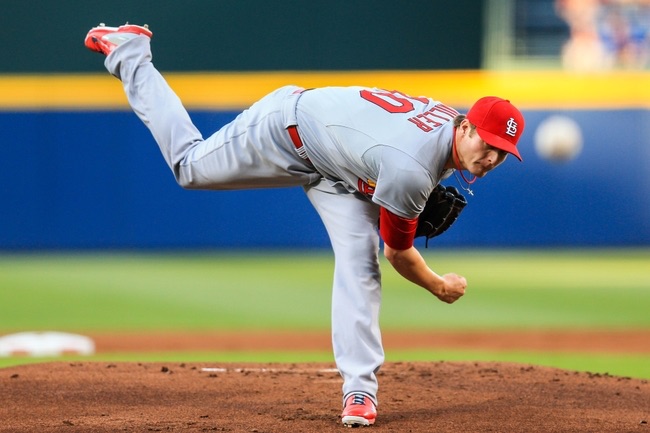 This is all seems eerily reminiscent of the 2003 exchange involving JD Drew and Adam Wainwright, except with roles reversed. Let’s give both parties credit for assuming considerable risk early on in hot stove – it was necessary and we should’ve seen it coming. As you can probably tell from mere paragraph size alone, I’m intrigued by Atlanta’s side of the agreement. At first glance, the deal seems quite lopsided. Upon further review of the economics and other external factors, it was a plausible venture worth exploring. The Cardinals sold low and bought high; the Braves bit on ten years of controllable assets. Be sure to follow back and see if Jason Heyward is playing for the Yankees the next time a blockbuster like this happens. Kidding, kidding…

And a question for Elias: when was the last time three former first rounder picks 25 and younger were shipped in the same transaction?