On Wednesday, the Miami Marlins officially announced the signing of their face of the franchise, Giancarlo Stanton to a record setting, 13 year, $325 million contract extension which also includes a full no-trade clause and an opt-out provision after 2020. The Stanton deal, on the surface, seems great for Giancarlo who now owns the largest deal in professional sports history and also seems to suggest the Marlins are turning a new leaf from their previously held image of the miserly team that everybody loves. I hate to be the one to break it to anyone who believed this to be a happy marriage but this is still the same old Marlins and this “generous” contract is nothing but a sham. Let’s digest the contract, shall we? 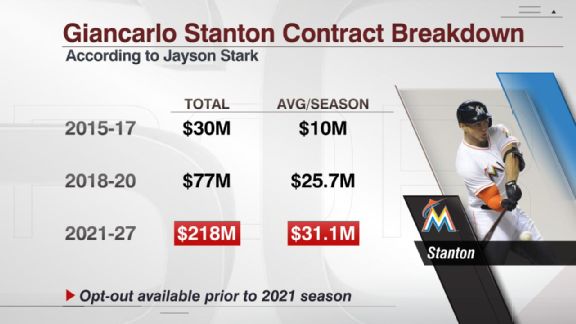 When I first got news of the Stanton deal, quick division in my head let me know Giancarlo would earn $25 million annually. This would be the first red light of many. Stanton’s $25 mil average annual value would be tied for eighth highest in the 2015 season with only players such as Clayton Kershaw, Alex Rodriguez (yikes!), Justin Verlander, and Matt Cain (what happened to him?) earning higher. Washed up ex-MLB stars such as Ryan Howard and Josh Hamilton will be earning the same amount of dinero as Mr. Stanton. The $25 mil annual value is also strange considering Miguel Cabrera’s new deal with a $31 mil average salary. Giancarlo Stanton is arguably the second most talented position player in baseball behind somebody named Mike Trout (we’ll talk about him later I promise.) The bottom line is I was expecting a deal around the lines of an average annual value north of $30 million (the new going rate for MVP caliber players in baseball.) Once the contract details were leaked, the heavily backloaded deal made me quickly realize exactly why the Miami Marlins were so quick to get this deal done with Giancarlo Stanton. As later explained in his press conference, Stanton agreed to earn $107 mil over the first six years of his contract. In fact, he will only earn $6.5 mil in 2015, $9 mil in 2016 and $14.5 mil in 2017 (Should’ve hired Scott Boras, Giancarlo!) Yes, Stanton on his own will, decided to take a paycut from the much higher salaries he could’ve demanded in arbitration and ultimately free agency in 2015-2016. For the sake of comparison, A.L MVP Mike Trout signed a 6 year-$144.5 million contract extension also starting in 2015. Stanton will be earning roughly $40 mil less in that time span before he has the opportunity to opt out. But for those who argue “Yeah but the Marlins are crazy for giving Stanton $218 mil over the last seven years!” I ask: will $31 million in 2021 be equal to $31 million in 2014? Inflation and the increasing revenues in baseball will make $31 mil in 2021 seem like $25 mil today. Is a $50 million annual contract really inconceivable even 10 years from now? The Marlins know very well that Stanton’s contract isn’t as prohibitive as it first seems.

Giancarlo intimated in his press conference that the decision to earn significantly less in the first three years of the deal was to help the Marlins maintain payroll flexibility to help sign free agents and build a more competitive team. In other words, Marlins owner Jeffrey Loria has struck again. Professional con artist, I mean art dealer, Jeffrey Loria (worth $500 million) cried poverty to his star, Giancarlo Stanton. He sold the gullible Stanton on giving the team a steep discount so they can raise the league’s second lowest payroll Opening Day 2014 of $47.565 million to a whopping $60 million next season! You, I, and your neighbor all know Loria doesn’t have any intention of being big spenders in free agency or the intention of keeping Stanton in a Marlins uniform after his contract exceeds $20 million in 2018. This deal allows the Marlins to keep Stanton in his prime for the short term future and buys them time to trade him after 2017 when his contract becomes too expensive for the Marlins liking. They then will simply ship him off to a big market team that can take on the hundreds of millions of dollars left on Giancarlo’s deal. Loria is no stranger to letting others pay the hundreds of millions left on his bill.  Just ask the taxpayers of Miami who are paying for Loria’s new Marlins stadium. The $500 million borrowed by Miami-Dade County will eventually reach $2.4 billion by 2052. Loria, Samson, and his scam artist buddies in Miami know a good business deal when they see one and the Stanton contract is one of the same. The Marlins’ history and the owner’s terrible reputation with the city of the Miami gives everybody the right to question the team’s intentions including this newly signed Giancarlo Stanton contract. History tells us Stanton will not be a life-long Marlin and it is only a matter of time till Stanton will be chasing the 500 homerun club in another uniform. Wednesday’s press conference was a façade to the rest of baseball and Marlins fans (are there any left?). The N.L MVP runner up, Stanton, spoke about his aspirations to win and while that’s all swell, his decision to sign a contract extension was not smart by any means. Just ask Mike Trout, who will be laughing all the way to the bank when he hits free agency in 2021.