Like many news that break during 2:30 AM, the announcement of the Knicks and Phil Jackson parting ways was a bit shocking. Waking up to learn the news, I thought I would have greater satisfaction with the firing of yet another failed executive in New York. Instead, it felt more like the new norm with the Knicks, an expectation of failure and the need to find yet another captain to steer a ship lost at sea. There were many reasons for the owner, James Dolan, to finally cut ties with Jackson beginning with the 80-166 record under his presidency, the inability to recruit any prominent free agents despite Jackson’s eleven rings, and the deteriorating relationship Jackson had with his players and staff. However, my biggest gripe with Jackson during his Knicks tenure was a lack of any concrete plan for the franchise. Throwing shit at the wall and hoping it stuck was in essence the Phil Jackson-Knicks presidency.

Losing will get almost anybody fired but the Knicks dysfunction was more about the lack of leadership than about wins and losses. Knicks fans need to look no further than Brooklyn to see what many perceive to be a much more stable organization with level-headed Sean Marks in charge. Despite having almost no assets and really no hope until 2019, there is a culture of accountability and hard work slowly brewing in Brooklyn. During Jackson’s introductory presser, there was a belief that the greatest coach in NBA history and former Knick would be the one to bring the team back to relevancy and instill the type of unselfish ball his Knicks played during the 70’s, the last time they won the championship.

Phil’s reign got off to an inauspicious start as he wasn’t able to convince his first choice and close friend, Steve Kerr to coach the team. For whatever reason, Jackson wasn’t able to close the deal with Kerr after he verbally agreed to come to New York. Having made what looks like the smartest decision in NBA history, Steve chose to coach a young up and coming Golden State team and now looks to become the winningest NBA coach of all-time leading the dynasty by the Bay. You know the rest as Phil then named Derek Fisher, Kurt Rambis, and then Jeff Hornacek as his next head coach but the common thread they all share the ineptitude to successfully install Jackson’s vaunted triangle offense.

Personally, I had no problem with the system and think it often became a bigger deal both with the team and New York media. But I was surprised that a coach who lives and breathes the offense was unable to teach neither his coaching staff nor his players about the system that won him eleven championships. Maybe it was due to not having Tex Winter by his side for the first time in years, but Jackson wasn’t a very good teacher of the triangle to say the least. Players openly displayed confusion and it felt more like rocket science than an ordinary basketball system. But more importantly, Jackson didn’t fail because he was unable to execute the triangle offense but instead due to his inability to acquire enough talent.

Looking back, it’s quite ironic that Jackson’s first major roster decision of re-signing Carmelo Anthony with a full no-trade clause may have been the final nail in the coffin of his presidency. While Jackson later put a lot of the blame on Anthony, it was Jackson’s call to build around an imperfect player who really didn’t fit the bill of an offense built on constant ball movement. Nobody would’ve blamed Jackson if he decided to start a full rebuild rather than give Anthony a near max contract and the ability to control his own destiny. So, one would assume Jackson’s initial plan was to build a playoff contender around Carmelo Anthony. 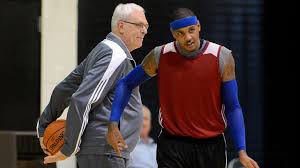 One 17-win season later, Jackson soon realized that his original plan wouldn’t work and to his credit, he made the greatest decision of his time with the Knicks by listening to his close adviser, Clarence Gaines. Together, they drafted Kristaps Porzingis (the only beacon of hope for Knicks fans) who was universally hailed at the time as the wrong draft pick for the franchise. For the first time in what seemed like forever, Jackson considered a new direction for his team: a necessary rebuild along with maintaining cap space flexibility. And they did make progress in 2016, as they increased their win total to 32.

But rather than stay the course and rebuild naturally through high draft picks and the accumulation of young talent, Jackson decided to change plans again and fight for the playoffs. Trading for Derrick Rose, a shell of his former MVP self, also meant signing a worn-down Joakim Noah to a four year $72 million deal (Phil judged Noah’s good health with a pull-up!) and Courtney Lee to a $50 million contract. And soon after the 2017 NBA season played out, it was clear the Knicks had no business contending in the Eastern Conference as his squad played little to no defense and still looked uncoordinated on offense. Rather than accept responsibility for a lackluster season, Jackson was quick to shift the blame on everyone except himself. During his final press conference of the season, Phil as usual didn’t feel he was the reason for the Knicks losing: “I never took a jump shot. Never made a substitution. But the buck stops here.” To Jackson, the season was obviously a disaster because Hornacek wasn’t fully committed to the offense and the players showed too much resistance with Melo leading the way with his iso self.

Jackson could no longer fire a new head coach or blame it on players as every man on the roster was handpicked by Phil himself. Instead, he had to double down on the madness. This meant making the majority of basketball decisions based on the triangle and showing his authority by getting rid of anyone who disagreed with this route. Even if it meant trading his biggest asset: Kristaps Porzingis. The Phil Jackson-Carmelo Anthony situation transpired throughout the entire season with Melo playing his role as a loyal employee and never once publicly badmouthing his boss. Phil, on the other hand, told the entire association about Anthony’s availability and questioned the veteran’s will to win. It also angered Jackson that his young superstar in Porzingis openly defied him by not attending his annual exit meeting.

Kristaps’ silence revealed how little respect Jackson had left in the organization. Instead of nipping it in the bud by fining Porzingis, Jackson chose to not meet with Porzingis and discuss their differences before the young seven-footer headed back to Latvia. While the Knicks ultimately kept Porzingis, it was clear that he wasn’t an untouchable anymore as the triangle was the only thing that would have Jackson’s loyalty. So much so, that the team drafted for “best triangle fit” over best player available as Jackson chose Frank Ntilikina, an 18- year old French point guard who takes well to instructions over arguably greater talents in Dennis Smith Jr. and Malik Monk.

Phil will always be known as one of the greatest coaches of all time but it certainly felt as if his ego got too big even for a city like New York. None of his past skills as a hall of fame couch such as communication with players and bringing the most out of five men on the court seemed to translate to the front office. From his familiar high chair in Madison Square Garden, Jackson delegated many of his responsibilities to others as Gaines Jr. and the rest of the Knicks excellent scouting department prepared for the draft and Steve Mills, the general manager, worked on actual contracts for players and developed relationships with agents across the league. While Jackson doesn’t leave the franchise with much to look forward to in the near future, he deserves some credit for holding on to all of his first round picks and adding three young players to the future Knicks core in Porzingis, Hernangomez, and Ntilikina.

Essentially, Jackson failed to deliver when it came to leadership and developing theculture of unselfishness and sacrifice all great organizations have. The next Knicks decision-maker and Steve Mills will have to learn from Jackson’s inability to have a clear direction for his franchise and finally choose a rebuild over short term fixes. So no… this doesn’t mean signing a Jrue Holiday or a Jeff Teague to fake playoff contention since the Knicks are not in the same stratosphere as the Golden State Warriors or the Cleveland Cavaliers. Rather, the Knicks have to clearly play the few young talent left on the roster they have and put the team in position to acquire another young All-Star level talent (Luka Doncic? Michael Porter Jr.) in next year’s draft. The “process” has almost come to an end in Philadelphia as Sixers fans can look forward to a Fultz – Simmons – Embiid triumvirate. Despite all the losing, the Sixers have maintained a level of optimism and tangible culture where success is expected soon. Meanwhile in New York, the triangle is dead and Zen has run out as Phil Jackson proved eleven rings means nothing when it comes to building a winner with the Knicks. There’s not much left for the Knicks and their fans to do except trust the process.