As the clock hit midnight, NBA free agency is finally upon us. We finally have a winner of the Paul George sweepstakes, Russell Westbrook and the Oklahoma City Thunder. Meanwhile, both Celtics and Clippers keep their guys in Terry Rozier (sorry Danny Ainge) and Blake Griffin. There a lot of dominoes still yet to fall as Gordon Hayward and Kyle Lowry entertain leaving their former teams. The general sense I get from the Knicks, however, is that they want to sign players to short term contracts for not much of our cap space and that is exactly what I would want to do as well. This year there are some rather interesting names that wouldn’t register for most teams or fans but ones that I think can a difference with us. My goal for all of the suggestions is that they are under 28 or 30 years, with a few exceptions since the Knicks need to get young. Good organizations make a lot of these kind of moves that truly do pay dividends later on. Also, each of them will not cost the bank and are affordable, maybe even for the minimum.

The first guy I want to talk about is Anthony Brown. He was a Lakers draft pick and went to Stanford, really tearing up the D-League with his amazing shooting (47% from three which is impressive anywhere!) He’s a good kid who will be in the league a long time as a possible sixth man and will bring that culture with him as well somebody like Ian Clark. Clark has won championships with the Warriors and should they not want to retain him, I think he could get a call. He had a few games where he burst out when their stars weren’t playing and I’d be comfortable paying him $5-6 million annually. Tyreke Evans is another interesting case as he is often hurt but a stud when he plays, kind of like Eric Gordon last year and everyone sees how that has worked out for the Rockets. He’s up for a rebuilding value 1 year contract and I could offer as much as $10 million for his service. Similarly, Ben McLemore is a player who will want to choose his fit carefully and I think you could pitch him well about the opportunity here – something he never got in Sacramento. If we can develop him, he could live up to his potential and I want to lock him up for at least a few years at $10-12 million because he’s so young. 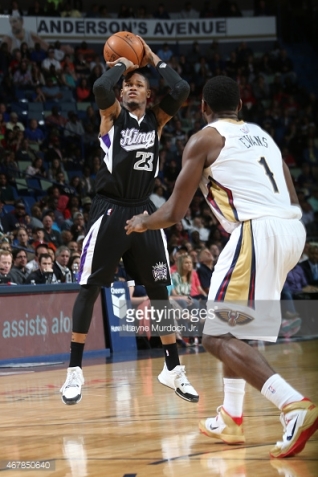 As we get further along this list of targets, I see guys like Jordan McRae and James Young who could be had for promised roster spots. Both are supremely talented and have made strides in recent years, enough to finally be rotation players. McRae is long/athletic, I thought the Cavs could’ve used him better as an extra weapon, while Young can give that energy Boston thought he would when they drafted him high. If all goes well, you never know what they can become with their high ceilings. CJ Miles had a bad year so maybe he will take less than what’s expected although I think Troy Williams is similar and can be had for cheap. I liked him a lot in college when he played for Indiana too. The small forward market is ridiculously bad, however, Luke Babbitt might be getting overlooked with his size at 6’9′ and long range that comes with less than stellar defense. Assuming Miami doesn’t want to keep another of their threes, James Johnson is also an option to consider after his unexpected production this year at a good price point. I know the club is plenty deep at the big man positions but you can’t have enough of them in my opinion. Terrence Jones and Donatas Montejuanas had lost seasons after they were stuck in bad money situations so maybe they want to find a home quickly. The two are very different but are unique in their own right and can grow into starting players if Hernangomez comes off the bench as a scoring low post center.

I would be remiss if I didn’t mention Andre Roberson, but the reason I didn’t is because I highly doubt OKC lets a first team all defender like him walk away especially after getting Paul George. Four years for up to $60 million seems fair even with his offense as he certainly deserves what Joe Ingles received.

Patrick Patterson and Dewayne Dedmon are athletic freaks who could flourish in our offense. Dedmon, in particular, is interesting after a good season in San Antonio. After all, there is a chance Patterson can get paid and Mike Muscala is probably a better value. Festus Ezeli was just waived and I love his character, and he should bounce back after his payday last year. They can fill the tough guy roles rather easily as can New Orleans’ Dante Cunningham with their defense and improving strokes. Restricted free agency is always tough and unlikely as Caldwell-Pope, at least $15 million, and Jonathan Simmons will probably get matched by their respective teams. Shabazz Muhammad is limited to scoring but is probably one of the only guys who won’t get matched if paid high enough. He needs to get in game shape, though he was one of my favorites a while ago. JaMychal Green is a popular name in certain circles but fits Memphis well. Alan Williams is as huge a player there is in the NBA and he had impressive stats in a limited sample size. Phoenix is less likely to keep him than Alex Len, who I feel has a big a ceiling as any RFA even if it’s hard to pin down just how much you’ll have to give him and if he coexist long term with Billy etc.  Alex Poythress and Christian Wood are more examples of high upside players we should be targeting. They were overlooked in Philly, have two way potential and play like wing players even though they’re not. Poythress used to be a top high school recruit at Kentucky and Wood left school too soon.

The hardest question for me this offseason that I’ve struggled with has easily been what to do about the point guard situation. Drafting Frank Ntilikina is the answer to that and everyone in New York should want him to play as much as possible. The problem is he’s not much of a playmaker right now as he’s had most experience playing off the ball in Strasbourg and not on it. In interviews, he has stated that one of the players he watches is Rajon Rondo despite them not having a similar game with vastly different heights. Rondo is a generational pass first guard, even if that’s not exactly what you want Frank to be instead of a kid that knows how to get his. Every July, there seems to be a call for Rondo to become a Knick and I’ve never bought it or thought the time was right.

Right now, I’m warming up to the idea as Rajon can hopefully serve as that mentor for Ntilikina without us having to splurge on a George Hill. I am aware of the OFF field and clubhouse concerns that come with him but Dwayne Wade had nothing but positive things to say about him and clearly had mutual respect even with a shaky 2016-2017. You could always cut him loose too and he’s always wanted to play on a big stage like the Garden as it gets the best out of him. His impact will not be that of a Derrick Rose, who threatens to take shots away from the franchise Kristaps Porzingis. Rather, he’ll likely get him the ball more and not influence regular season records that much.

If he does don the orange and blue, the Knicks should not consider changing plans regarding Carmelo Anthony. I’m sure Melo would enjoy playing with Rajon Rondo but he’s not part of the future unfortunately. There’s no point of a repeat like last year and the market doesn’t have a veteran guard outside of Shelvin Mack. Instead, trading him to Houston makes more sense after their acquisition of Chris Paul. Ideally, I’d want multiple first round picks that the Rockets won’t care about along with Clint Capela and Trevor Ariza but I suspect they’ll want to keep one of them for defensive purposes. Ryan Anderson is not my first choice but if taking him means a lot of future assets then so be it. He does shoot poorly only in Houston and Knicks were interested last summer. If David Griffin joins the Knicks front office and Chauncey Cleveland’s, perhaps something can happen with Kevin Love contingent on the Celtics getting Hayward.

Do you agree with any of the names mentioned? Who do you want to see the Knicks go after? Leave your suggestions in the comments below and follow us on Twitter here.