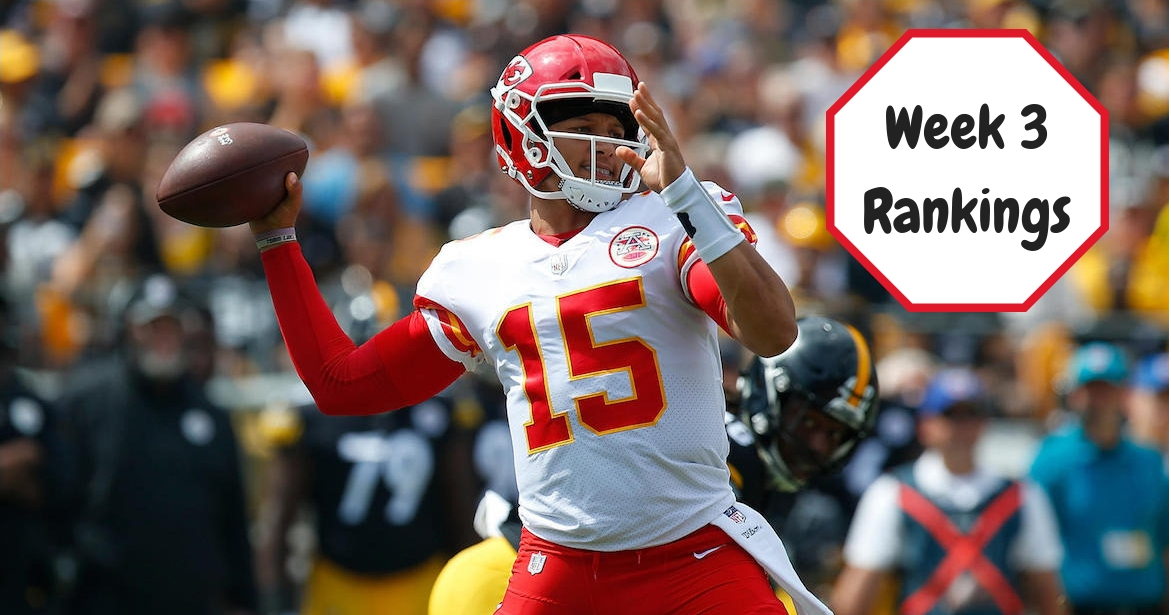 Hey, we didn’t do so bad for our first week! Our picks like Phillip Rivers had 23 points, Stefon Diggs was number one in his position with 31, Tyler Lockett oferperformed, the Jets defense was sneaky good like kicker Brandon McManus, Tevin Coleman had over 100 rushing yards with four catches too and even an injured Jay Ajayi was as good as Jordan Howard when he scored before coming out like Larry Fitzgerald. But I think we can do better and feel great about this week!

Prepare to be amazed:

This is the game we’ve all been waiting for. Garropolo will get his own crack against a defense that has given up over 400 yards in all their games this year. He’s about ten years younger than the Chiefs’ two opponents and should be fired up to go against young Pat Mahomes who will challenge him all day for the title of best young quarterback in football. There will be touchdowns everywhere for our pleasure.

While you weren’t looking, he carved up the Cardinals last week even with only one throwing touchdown but should’ve had a couple more even in a 34-0 blowout. I’m betting he’ll have more, especially since Joey Bosa won’t be there to make his job harder with the Chargers. He’s been as advertised with his accuracy and keeps taking steps forward after many doubted the first overall pick.

It pains me to say this about one of my favorite players but he’s just not getting any help. His line, play calling, receivers and backs all stink so Russ is always asked to do it by himself which won’t be possible. Garbage time points saved him on Monday but the Cowboys and Prescott can’t score either so it’s gonna be long game to have to watch. I suggest not doing so since Dallas loves to waste clock forever.

Derek was flawless in a loss but he’s going back on the road where the man is just abysmal. Miami’s defense has also been a nice surprise and the best unit in the league when you look at opponent QBR. There’s just not enough upside for me here in another sleepy matchup where neither team will sling it.

Another opportunity to exploit the last place Bills who have allowed the most rushing TDs this year? Sign me up! He’s going to get a lot of volume with Dalvin Cook out because of a hamstring injury and will want to show what he can do. Best part is that even if it’s the blowout we expect it to be, they’ll keep trotting him out since he’s not usually their lead runner who the Vikings will have back very soon.

What is this 2015? Gio also knows to perform when his number is called and will have his work cut out for him. Luckily, he’s an all around back so if one facet of his game isn’t working right away, the Bengals can get him going with the other. The Panthers haven’t been able to stop the ground so far this season and he can feel comfortable that he’ll be out there next week too, though probably not on my list again.

Now, yes, I know how risky this is and well aware of the nice committee Tom has with Burkhead and White but I think they do different things in goal line work as well as primarily receiving. This should be their most down option and they clearly think so with his decent load in a first NFL game. The three of them should lick their chops seeing the Lions give up almost 200 yards to Matt Breida and Alfred Morris!

Mel’s found paydirt these couple weeks but wasn’t banged up like he is now. I suspect his QB will have some more difficulty against a really good Rams team that stops RB yardage like he didn’t before so red zone trips should be far and between compared to before. But it’s hard to bench numbers and I get that.

This is mainly a PSA to say many picked the wrong Bronco in preseason to dominate the way he has. Royce Freeman will have more touchdowns but Lindsey is who gets him there and is simply electric. Clearly Denver agrees as the undrafted rookie is running away with most of the touches and carries as the hot hand who doesn’t even start yet so I like him even more if star CJ Mosely is out for the Ravens.
Wide receivers

There’s been no shortage of drama in the Burgh, the latest panic having to do with a cryptic Antonio Brown but let me just say that JuJu would be fine as their lead option as they saw week 2 when he was targeted 20 times. The Bucs can’t guard receivers for the most part and he should roast them from slot.

Speaking of getting additional looks, Nelson should continue to with Alshon and Mike Wallace both out. More luckily for him, CARSON WENTZ IS BACK for him to have even better times with than Nick Foles! Which Colts can guard him and Zach Ertz? This is his chance to prove himself as a legitimate top receiver.

Golden Tate will be game planned with and Marvin Jones might not play. This sets up Babytron to go ham as their most promising player and catch some big passes when Detroit is playing from behind late. He’s overpowering and can replace a lack of good running back and TE with size, speed and great hands.

He broke out for a change and there could be more where that’s from with a fringe 49er group that will likely be burned more than a couple times by Patrick III (sorry Richard Sherman. Love you but you’re old) Looking natural out there again sandwiched between Tyreek Hill and Travis Kelce, hopefully it continues.

This is not as much about him as it is his going toe to toe with Josh Norman who can really frustrate him. Washington’s secondary as a whole has been very good too and I would just double him if I were them.

It’s not often you get to take a clear difference maker this late, but it has to do with many not knowing about this feel good story who’s been among the best playmakers for a while. Perhaps a sensational catch of the year and upcoming performance with nice short throws from BORTLES will change that.

He hasn’t been a favorite of Mitch Trubisky’s but trust and chemistry take time to develop, which may happen by the time the night is over against an Arizona team that likes nothing more than giving up scores to tight ends. Will it result in career games for the duo to remember? Give them another chance.

I can’t promise another 75 yard hookup with the beard but who really wants to take a chance of that not happening? He’s a DeSean Jackson type threat at times and can get it when he wants like he did against the other Pennsylvania team. There are mouths to feed but not many bigger so it shouldn’t scare you.

A positive showdown on paper since he plays every snap he’s not injured, but Reed was just OK last time when more appealing and looked to in the second half. They need him to be much better before a bye.

There’s nothing wrong with Austin and his solid performances but the Saints actually play tight ends well. He’s not a bad sleeper as long as you’re realistic with expectations, not necessarily having a TD.

Adam was unlucky with his three kicks which were all extra points for Luck led touchdown drives. His team will likely not convert every time against the Eagles and have to give him at least a few field goals.

He did hit a game winner but he’ll be closer to just attempting chip shots against the Falcons after Brees steps it up like Drew didn’t against a stout Cleveland team now with Baker and puts daggers on Atlanta.

His cool name should do better against the Giants who try to let their offense have a chance to get back. In fact, it’s not hard to see a lot of the game just being him and the other Aldrick Rosas trading threes.

Will Gabbert get another game ball? Don’t look for it to happen unfortunately. Unless Ramsey is out.

When and if wild Andy Dalton is not in control, maybe the Panthers capitalize. Whatever they do, it’ll be better than their showing before the hurricane and probably in the middle of 8 and 30 points of W1/2.