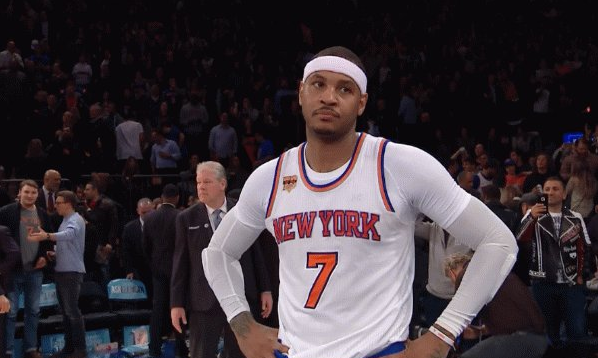 Stop me if you’ve heard this before. Carmelo Anthony and the New York Knicks should part ways. Insanity is doing the same thing over and over again and expecting different results. Yet, the Knicks and Carmelo insist they can co-exist even after three years of playoff-less basketball. Since Phil Jackson accepted his Knicks presidency, there was an expectation of change. Given his championship pedigree, Jackson was always expected to provide a win-now team and have no problem recruiting All-Star caliber free agents.

After two and half seasons, that expectation is largely gone and the mediocrity of the Knicks seems to have never left. Losing too many games to make the playoffs and too many games to reap the benefits of a high draft pick. Of course, that’s not entirely true as Jackson, Mills, and Gaines did hit a home run with the arrival of Kristaps Porzingis in New York. That’s why it’s interesting that the Knicks are not intent on taking their chances again on an extremely talented draft class in 2017.

New York had every intention of making the playoffs this year because only then could they convince Chris Paul this summer to join Carmelo. New York, like many other teams earlier this summer, targeted Russell Westbrook but an extension with OKC eliminated that option. After a trade and a few free agent signings the Knicks offseason was complete. A team with two former All Stars, Derrick Rose and Joakim Noah, a lethal scorer in Anthony, and a young budding All Star in Porzingis was surely playoff caliber, right?

With the season more than halfway complete, the Knicks playoff chances remain slim and dreams of a CP3, Melo, and Porzingis trio are almost dead. The team runs Hornacek’s pick and rolls more so than Jackson’s traditional triangle and looks disjointed on both offense and defense. While the team learned that they are most potent offensively in their small ball lineup with Anthony as a power forward and Porzingis as the center 44 games late, their defense doesn’t look to improve any time soon. Hornacek admitted earlier this season that they simply may not have the personnel to be a good defensive team. While I do believe defense can be coached, it’s wishful thinking that a team with Porzingis, Courtney Lee, and Lance Thomas as its only plus defenders can get stops when needed.

It’s time that the Knicks be honest with themselves and be honest about their chances to build a contender around Carmelo Anthony. The new CBA agreed to by the NBA’s Player Association and the owners make it even less likely that a star player (like Chris Paul or DeMarcus Cousins) would turn down a five year max contract of $210 million to sign a four year/ $138 million deal with ANY team let alone a non-playoff team. That’s why the draft is even more important now in today’s NBA where you can acquire a young player on a team friendly rookie contract and build your franchise around homegrown stars. Unless Steve Mills and the Knicks have a near guarantee that Chris Paul would seriously consider playing in New York this summer, they must make the hard decision to finally build around Kristaps Porzingis and accommodate Carmelo Anthony with a trade to a contender by the trade deadline.

Both the Knicks and Carmelo both know they cannot compete with Cleveland, Golden State, San Antonio, Toronto, or even Boston. We’ve seen attempts to pair Carmelo with an out of prime ex-superstar before in A’mare Stoudemire and now Derrick Rose. If the Knicks are really wise, they will understand that their main competition in the Eastern Conference are the Milwaukee Bucks and Philadelphia 76ers. The Knicks arguably have the second best young player in the East behind Giannis Antetokounmpo. Joel Embiid is showing everybody why he’s worth the wait with his ridiculous numbers and eventual Rookie of the Year award.

But both the Bucks and Sixers also have supporting future stars for their franchise cornerstones. The Greek Freak may have a young Carmelo in Jabari Parker and “The Process” will make some noise with last year’s #1 pick, Ben Simmons (not to mention the Sixers have two more high lottery picks in this year’s draft). Kristaps gives the Knicks the chance to compete for Eastern Conference titles and perhaps even the Finals down the road, but not without the help of another “super rookie”. The 2017 NBA Draft represents the Knicks best chance to find Porzingis his co-star for the next decade. Scouting the prospects available early, this year’s draft looks like a goldmine with names like Markelle Fultz, Lonzo Ball, Dennis Smith, Jayson Tatum, Josh Jackson, Malik Monk, Miles Bridges, Frank Ntkilina, Justin Patton, Jonathan Issac, and De’Aaron Fox. These are really good young players that would complement KP. In an arms race of young talent in the East, the Knicks should know none of these guys will probably be available without a top 10 pick.

Is a one in a million shot with Chris Paul worth giving up a talented young nucleus for the Knicks? If not, management should pick up the phone and find a new home for Carmelo whether that be Boston or Los Angeles. Anthony’s loyalty to the Knicks should never be questioned. In his six seasons with the Knicks, he has been a good soldier and teammate despite what you think of his playing style. Anthony even recently told Newsday that he would be open to waiving his no-trade clause if Jackson and Mills thought that would be in the best interests of the team: “If they feel like they want to go in a different direction, they want to start rebuilding for the future. If they tell me they want to scrap this whole thing, yeah, I have to consider it.”

If the Knicks have any doubt about their ability to build around Melo, it’s their responsibility to let him know. A no-trade clause doesn’t take away your ability to find suitable trades which can benefit both Melo and the Knicks. If Anthony rejects the trade, it’s his prerogative. Additionally, trading Anthony would lead to eventual trades of Rose, Noah, Lee, and others signaling a new direction of the franchise. The Knicks owe it to themselves and Melo to finally reach a resolution. Anthony’s prime unfortunately was wasted, and the same shouldn’t happen with Porzingis.